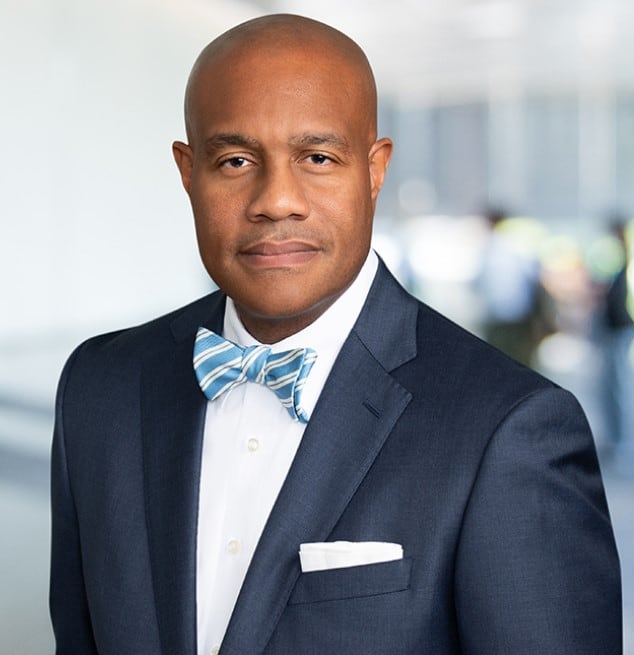 William Toles is recognized by Martindale-Hubbell as an AV Preeminent-rated attorney.

William is a trial lawyer with extensive experience handling high exposure litigation. He has handled more than 45 civil trials to a successful conclusion and jury verdict. Mr. Toles has trial experience throughout the state of Texas in tort litigation ranging from simple negligence cases to more complex premises liability, DTPA, commercial and contractual dispute matters.

Mr. Toles is active in his church and community. He is a member of the Steward Board of Christian Chapel CME Church. Mr. Toles has previously served as a United Way Grant Panel Member and Chairman, and he was a member of the Leadership Dallas Class of 2012 and a Class Advisor for the Leadership Dallas Class of 2013. William is also involved with Leadershape. He previously served as a cluster facilitator at a national session, and a co-lead facilitator at the University of Texas (Austin) and The Ohio State University. Additionally, he has served as a Big Brother through the Carrollton-Farmers Branch Independent School District.

Martha Elena Olivares, et al v Darrell Herndon, et al (Dallas County, TX) February 19, 2019, the Court of Appeals Fifth District at Dallas denied a motion for hearing en banc in a four-week trial in which FSSV senior partners Thomas W. Fee and William M. Toles obtained a unanimous defense verdict on June 8, 2018. Following the unanimous defense verdict, the trial court granted a motion for mistrial filed by plaintiff counsel. FSSV filed a petition for writ of mandamus, and the Court of Appeals ordered the court to vacate its mistrial order and sign a judgment on the defense verdict. Plaintiff then sought a rehearing en banc in the court of appeals, which the court denied. The case arose out of an accident that occurred on November 18, 2014 in Freestone County, Texas. FSSV's client hired a trucking company to deliver product to Katy, Texas. While in route to Katy, Texas the motor carrier hired by FSSV's client struck a truck on the shoulder of Interstate 45, killing the driver of the truck and injuring the passenger in the truck. The passenger of the truck alleged that he suffered a traumatic brain injury as a result of the accident. Plaintiff demanded $7 million prior to trial and asked the jury to award $15 million in closing argument.

Matt Kintz, et al v Lutheran Secondary Association of Dallas, Inc. (Dallas, Dallas, County, Texas) Fee Smith Senior Partners William Toles and Jennifer Lee Achieved a Unanimous Verdict in a Teacher Student Sexual Relationship Case in Dallas County (Texas). The two-week trial involved four (4) Plaintiffs who alleged claims including negligence, negligent misrepresentation, breach of contract, violations of the Deceptive Trade Practices Act, and gross negligence against Dallas Lutheran stemming from an inappropriate relationship between a Dallas Lutheran teacher and a student. Plaintiffs made multi-million dollar demand and refused to negotiate in response to Defendant's last pre-trial offer of $500,000. The jury only awarded two (2) of the Plaintiffs damages which included $25,000 to one and $60,000 to another. Dallas Lutheran was only held to be 20% and 10% responsible to these Plaintiffs, respectively. Thus, the total award against Dallas Lutheran was $11,000, in a case which was highly publicized in the media by the Plaintiffs.

Elizabeth Crump, et al v MCMC Auto Ltd. d/b/a Mike Carlson Motor Co. (Fort Worth, Tarrant County, Texas)FSSV senior partners William M. Toles and Scott W. Self obtained a defense verdict for FSSV's client in a one-week trial in state court in Tarrant County, Texas, in a case involving allegations of car dealer negligence. The plaintiff, a pedestrian who was filling her SUV with gas, was struck by a car that FSSV's client had sold approximately 3½ months before the accident. The car's owner and her boyfriend, who was driving the vehicle when it struck the plaintiff, alleged that the car's brakes failed. The plaintiff suffered a number of severe injuries and had medical bills of $491,000 as a result of the accident. The plaintiff alleged that FSSV's client failed to inspect and service the car properly before selling it and therefore asked the jury to award damages in excess of $6 million. Plaintiff counsel previously demanded $5.75 million prior to trial.

Pedwano, et al v Triple T Amusements (Canton, Van Zandt County, Texas) Obtained a unanimous (12-0) defense verdict in favor of Defendant in an accident involving two passengers on an amusement ride. The passengers were 14 and 18 years of age at the time of the accident. Both plaintiffs argued that they were injured in the accident and continued to have medical problems related to the accident.

Kinsley v. Cartwright's Ranch House. (Denton, Denton County, Texas) Plaintiffs claimed Defendant violated the Texas Human Resources Code and Texas Accessibility Standards Act causing one Plaintiff to fall and break his neck resulting in his death after being on life support for 4 days. The Plaintiffs demanded $1 million at mediation and $900,000 prior to trial. The jury deliberated 41 minutes and found that the Defendants were not negligent.

Whitaker, Individually and as the Administrator of the Estate of Luke Frederick, Jr., et al. v. Hilda Sena. (Dallas, Dallas County, Texas) Motor vehicle collision in which defendant hit a pedestrian, who died as a result of the accident. Plaintiff counsel asked for in excess of $1 million dollars in closing argument. Jury awarded $44,497.32 in damages.

Represented a defendant in state and federal wrongful death and personal injury lawsuits filed as a result of the Texas A&M University 1999 bonfire collapse.

Obtained summary judgment on behalf of a performing arts organization in a defamation/slander lawsuit in which Plaintiff was seeking damages in excess of $1 million.

"Escabedo Decision: How To Navigate The Issue of Medical Damages in a Personal Injury Lawsuit,"

"Guide to Premises Liability in Texas"

Topic " In The Weeds with Marijuana Law

Topic " How to Account for Hindsight Bias in Defending Your Claims

Topic " Preparing for and Defending the 30(b)(6) Corporate Deposition

Topic " The Anatomy of a Car Crash Case

Topic " The 22nd Century Law Firm " Closer Than We Think

Topic " Voir Dire " The Art of Reading Body Language; What They Don't Say Will Hurt You

Topic: A Guide to Premises Liability in Texas

2013 Claims and Litigation Management Annual Conference.
Topic: Non-Subscription in Texas: Can Opting Out of Workers Comp Be a Windfall or Liability?
(Paper written by Clint V. Cox, IV.)

Secretary, Executive Committee of the Washington and Lee Student Body, 1994-1995

American Board of Trial Advocates; National Board Member, 2015-Present

College of The State Bar of Texas

Board of Trustees, Washington and Lee University (May 2016 " Present)

(Board of Directors, Present)

The Fellows of the American Bar Foundation

American Board of Trial Advocates, Inducted 2007