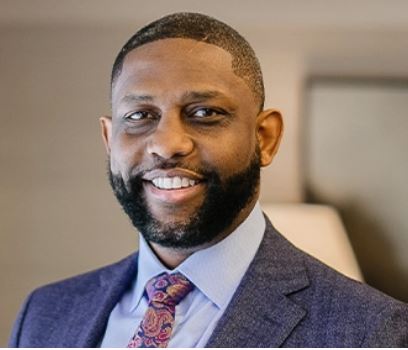 Navan is a principal at Beasley Allen Law Firm.

He is the firm’s lead attorney on the metal-on-metal hip implant litigation, proton pump inhibitor (PPI) litigation, and practices from the Atlanta office. Navan is licensed to practice in Alabama, Mississippi, Tennessee and New York. He is also an Executive Board Member of “Shades of Mass.” Navan is honored to currently serve as the 76th President of the American Association for Justice (AAJ).

Before he arrived at Beasley Allen, Navan had experience working for an insurance defense firm and an employment law firm. He was involved in cases dealing with medical malpractice, auto accidents, contractor liability, race discrimination and sexual harassment in the workplace.

Navan is married to the former Bridget L. Maynor, of Irondale, Alabama, and they have twin sons, Roman and Jaxon. Navan attends church at Northview Christian Church – Communion City.

Navan’s hip implant litigation involves victims who have defective hip implants causing severe pain, metal poisoning, revision surgery, and in some cases, permanent injury. These defective hip devices are manufactured by various companies, such as Johnson & Johnson and DePuy Orthopedics, among others.

He has been instrumental in assisting with the verdicts and global settlements against major hip implant manufacturers, including Johnson & Johnson / DePuy for $4.057 billion, Howmedica Osteonics Corporation / Stryker for over $1 billion, and Biomet Corporation for more than $250 million, as well as additional confidential settlements involving other metal-on-metal and/or modular-neck hip components.

Upon arrival at Beasley Allen, Navan was responsible for overseeing the Meridia pharmaceutical drug litigation, a medication that caused heart attacks and strokes, as part of the Mass Torts Section.

Navan was also heavily involved with the hormone replacement therapy litigation, representing hundreds of women who were diagnosed with breast cancer as a result of ingesting these combination hormone medications. His trial team was responsible for obtaining a $72.6 million verdict for three hormone therapy clients that went to trial in Philadelphia, Pennsylvania.

Navan was heavily involved with the COX-2 inhibitor (Vioxx, Celebrex and Bextra) pharmaceutical drug litigation. These drugs were used for the treatment of arthritis, but caused heart attacks, strokes and serious skin reactions. Specifically, he was the firm’s lead attorney for the Celebrex and Bextra pharmaceutical litigation. Navan was one of the leaders in the Bextra/Celebrex Multidistrict Litigation, serving on both the Science and Discovery committees.

Additionally, Navan was responsible for overseeing the Permax and Dostinex pharmaceutical drug litigation. These drugs were used for the treatment of Parkinson’s disease but caused damage to the users’ heart valves. Overall, Navan has obtained more than $360 million for the specific clients that he has represented in the various areas he has practiced.

As a member of the Personal Injury Section, he mostly litigated nursing home neglect and abuse, as well as wrongful death trucking cases in Mississippi, Tennessee, Alabama and Georgia. Navan has litigated cases where the nursing home resident suffered from injuries such as multiple falls, bedsores, malnutrition, dehydration, aspiration pneumonia and sepsis/infections. He has been successful in obtaining verdicts and/or settlements in the millions for his nursing home and wrongful death trucking clients.

Navan serves in leadership positions for various legal organizations. Currently, Navan serves as the 76th President of the American Association for Justice, which is formerly known as the American Trial Lawyers Association. This is Navan’s ninth consecutive year serving on the Executive Committee. He has also served as a past chairman of the Minority Caucus, past chairman of the Diversity & Inclusion Committee and a member of the Board of Governors. Most recently, Navan is a founding member of the Executive Committee of “Shades of Mass,” which is a group that advocates and facilitates the appointment of minorities to leadership roles in federal and state-based centralized civil actions (including federal MDLs).

Navan has earned a Martindale Hubbell AV Preeminent Rating. In 2017, he was awarded the American Association for Justice’s (AAJ) Minority Caucus Stalwart Award for his dedicated years of service to the organization. Navan has been regularly selected to the Best Lawyers in America list, as well as being named to the Super Lawyers list for the last few years. He has also been named to the Lawdragon 500 Leading Plaintiff Consumer Lawyers, which is the 500 best attorneys across the nation in this category.